“Charley’s War was the first British comic strip to properly tackle WW1, according to writer and comic book historian Tim Pilcher. He said: “This country has a great history in producing World War Two comics such as Battle, Warlord and Commando. No-one had really done the First World War before writer Pat Mills and artist Joe Colquhoun did Charley’s War.” Battle, a British comic published in the 1970s and 80s, carried the anti-war strip.” 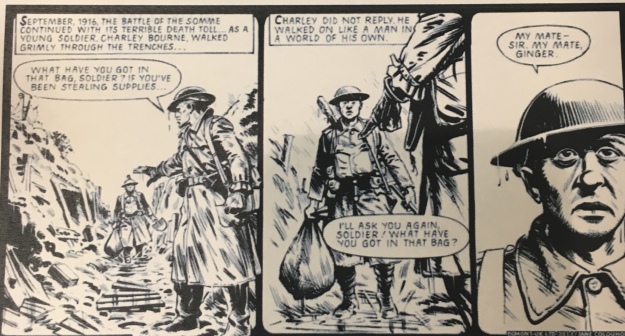 Researched on Google for Cartoon Strips and came across this amazing set of comic strips, although I hardly think they are comical, they tell the story of the pain the soldiers went through in World War I.  This particular sketch is showing the historical event of World War I (Time) during the Battle of the Somme (Place).  Telling the story of a man carrying the remains of his friend in a bag and being accused of stealing supplies. 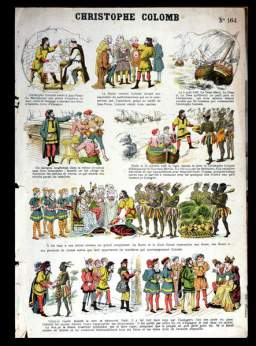 Illustrated history of Christopher Colujbus (1451-1506) and the discovery of America – Courtesy of Belgian School and Bridgeman Images – accessed January 10, 2019

I researched the Bridgeman Images website – direct from OCA information links.  I tried various searches on ‘Cartoon Strips’, ‘Visual stories’, ‘Comic strips’, and ‘Cartoon strips’.  The latter search was successful with many French comic strips.  However I was drawn to the Christopher Columbus one as it featured both Time and Place – being the discovery of America in 1492.  Compared to the previous newspaper comic strip, there are no speech marks in this historical comic strip, the writings are shown underneath the drawings.

As I live in Saudi Arabia I was interested to see if there were any comic strips to be found, I came across the Arab news that feature famous children’s cartoons such as Tom and Jerry, Denise the Menace and Garfield, that were being translated into Urdu.

I am very aware that because of the different censorship in Saudi Arabia many cartoonists would not make them public, however I have found cartoons on various websites some quite funny and some I wouldn’t feel it appropriate to put them on my blog.  My google search on ‘Arab comic strips’, ‘Arabic cartoons’, ‘comic strips in Arabic’ led me to the Arab News and google images, plus various other sites however these were blocked.

On reflection to searching comic strips I found it very interesting, especially those that actually were not funny, I wonder why they are called comic strips.  Cartoons have changed over the years in the way bubbles containing speech has helped cartoons decipher who is actually speaking instead of the writing being underneath the cartoon.  I researched further into Arab cartoons but I felt it inappropriate in most cases to not upload any of the images due to any political involvement.  I found the cartoon strips called Charley’s War to be profoundly moving and very relevant to Time and Place.  A lot of cartoons didn’t reveal much in respect of time and place such as the Tom and Jerry or Garfield cartoons, I did come across many French cartoons on the Bridgeman website and Google search also provided a variety of images from across the world that were certainly very political and often damming of presidents and royalty.  The research and information gained has been very thought provoking and extremely interesting.

Connotation – describes meanings that are suggested by the literal elements (in a Renaissance painting, an apple may symbolize temptation)

Denotation: The image ‘Join the Navy’ shows a young  happy sailor in uniform, riding what looks like a wooden torpedo, there is wording ‘Join The Navy – The Service for Fighting Men.

Connotation: The advert is trying to depict that to join the navy you will have fun riding the waves, the way the man is riding the wooden torpedo is of a style that is a man riding a bull or bucking bronco which was a manly sport, often dangerous.  So to join the navy you will be a man, having fun, looking for adventure and will be involved with weapons, of a dangerous nature.

I think the picture is intentional and trying to attract young men who are looking for adventure but have fun at the same time. 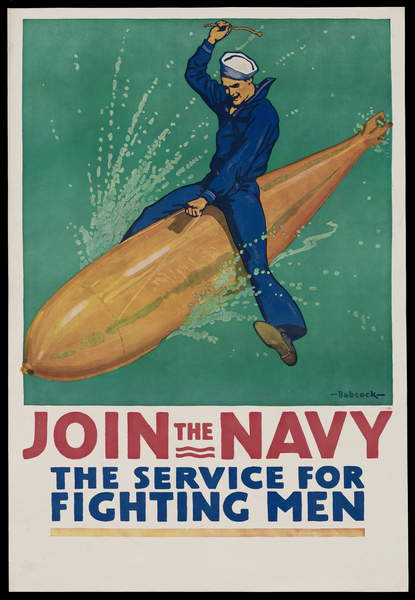 Denotation: A woman wearing a red and white spotted headscarf, and blue shirt, flexing her muscles, with the wording ‘We Can Do It’.

Connotation:  The image is implying that women can also act like men, or do the same job as a man, it is saying you too can be strong like a man, the muscles reflecting a strong armed, muscled man and can wear a shirt like a man.  It appears to be calling housewives (the red and white spotted head scarf is an image of that era of a woman at home, cleaning, washing etc.).

On reflection it is perhaps showing a side to feminism, whereby women are equal to men, they too can be strong like a man, do a job like a man, they don’t have to stay at home being a housewife or doing a cleaning job.

Values have changed over the years, it was great at the time that women could go to work doing something other than being a housewife, cleaner, chambermaid or nanny.  In today’s world it has changed dramatically whereby women are CEO’s of companies, they can do almost any job that a man can do and appear to ‘have it all’.  However, I do think this has backfired a bit and caused many problems within marriages.  Women now have to juggle full-time jobs along with running a house, raising children and be a good wife. Although I think it is good that women have these equal rights, I also think raising children and running a household is a credible job and extremely worthwhile and should be given more credit than what is sometimes perceived as not a ‘proper job’.

What does this apple mean?

Apples are normally green or red in colour, there are various types like ‘Golden Delicious’, ‘Grannies Cooking Apples’ or ‘Rosey Red’.  Apples are considered to be healthy, good for the diet and skin ‘an apple a day keeps the doctor away’.  However, historically Apples have also been named as  ‘the forbidden fruit’ such as the story of Adam and Eve  in the Garden of Eden.  In Snow White and the Seven Dwarfs the apple has  been a poisonous weapon with the wicked witch offering it to Snow White causing her to be in a coma.  There’s the Adam’s apple in your throat and a toffee apple that’s eaten at Halloween, not to mention a cold apple cider on a hot summer’s day.  However, in today’s society Apple means something completely different.  It means a phone, a laptop, ipad or watch.  Unless you’ve been living on a remote island for the past twenty years we know Apple is a famous company known for its unique brand of luxury computerised items, with the eye catching Apple, with a bite taken out of it.  There are also the apples used in still life paintings giving a different meaning such as signifying life and death or mortality.

Apple: Signifier: Silver Apple with bite out of it  – Signified: laptop, watch, phone

Apple: Signifier: Apple in painting along with cheese and nuts – Signified: forbidden fruit/death/mortality